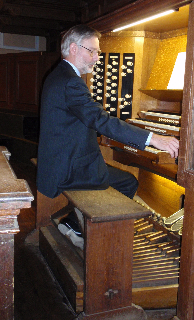 Paul Ritchie was born in Newcastle upon Tyne and was a chorister in the choir of St Nicholas Church, South Gosforth. Following a five year period living in London, where he learned to play the E flat horn and became a bugler in the army cadets, he returned to Newcastle and joined the choir of Holy Cross, Fenham, where he was to return some years later to install a new pipe organ.

In his late teens he joined the choir in the city centre church of St John the Baptist, and over a ten year period sang alto, tenor, or bass, as required, learned to conduct, and had organ lessons with Geoffrey Watson. Paul was a founder member of the St Johnʼs Chamber Choir, later known as Musica Johannis. He was also a member of the Northumbrian Consort, an eight voice chamber choir originally founded by Geoffrey Watson.

Following his appointment in 1981 as Organist & Choirmaster at St George’s Church, Cullercoats, Paul composed prolifically for the choir and congregation, expanding the choir library with anthems, canticles, carols, descants, hymn tunes, psalm chants, settings of the mass, and two complete three year cycles of responsorial psalms. He retired in 2005, having been the longest serving organist in the churchʼs history.

An organ builder by training, Paul was involved in the design, construction, and installation of many of the instruments built by Church & Company of Stamfordham, some of which were installed in the United States, including the Sacred Heart Church in Muskogee, Oklahoma, and St Peterʼs Church in Geneva, New York. In recent years he has designed pipe shades for two organs built by Lammermuir Pipe Organs.

Paul has a particular interest in historic organs, and in baroque musical forms, including the Dutch tradition of composing variations based on Genevan psalm tunes. He has made several trips to Holland, and has had the opportunity to play many beautiful historic instruments. Paulʼs other interests include art and architecture, with a particular interest in the design of organ cases and the way they relate to the buildings they occupy.